How to Make Your Own Vanilla

Do you like vanilla? It is a flavor that can be amazing on its own and at the same time enhance the flavors of many other ingredients. Have you ever forgot to put the vanilla in a recipe? One small teaspoon will make just about any baked good taste better. It is kind of like salt. You may not be able to say what is missing, but you know the food isn’t quite right without it.

Vodka is a very neutral alcohol with little to no flavor. When making vanilla extract, the cheap stuff works really well. It is not necessary to by high end vodka. Save that for your martini where you can tell the difference.

Making vanilla is super easy. You chop up vanilla beans, place them in a jar with an air-tight lid, cover the beans with vodka and let it steep for 3-6 months. I like to make this in big batches and keep one jar steeping while I am using another jar. The longer you let it steep and the more vanilla beans you add per cup of vodka, the stronger the vanilla.

To make the most of the expensive vanilla beans. I will use the pieces of bean to make custard, pudding, or ice cream. When the vanilla is ready, you can strain out the solids using a fine mesh strainer lined with a coffee filter and store the extract in a bottle or jar. Use the leftover vanilla beans to flavor the milk or cream for your custard as you heat it and strain out before cooling.

Cut the vanilla beans into 1/2 inch pieces and place in a jar with an air-tight lid like a mason jar. Cover with 3/4 cup of vodka. Place the lid tightly on the jar and let steep in a cool and dark place for 3-6 months. Once or twice a week, shake the jar. To use the vanilla, you can strain out the vanilla bean pieces through a fine mesh strainer lined with a coffee filter, or if you do not mind a few specks of vanilla in your food, you can just pour it off the top of the jar. 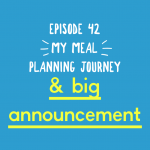 Episode 42 My Meal Planning Journey and a BIG ANNOUNCEMENTGeneral, Podcast 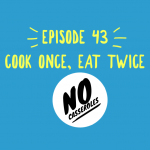