The first time I ever had a puffy pancake was at our neighbor’s house for brunch. She called them “Dutch Babies” and made them in a special pan that had individual wells that were filled with butter. They were fluffy and crispy on the outside and soft and custardy on the inside which was basically heaven. My mother liked them and got the recipe, but didn’t make them for years because making the little ones in the special pan seemed fussy and not worth the effort. Years later she discovered that you could make them in a 9 x 13 pan and with much less butter and they quickly became a family favorite.

Preheat the oven to 425 degrees Fahrenheit. Place butter in a 9 x 13 pan and put in the oven until the butter is melted. Place eggs, milk, flour and salt in a blender and blend until mixed well. You may need to scrape the sides. Pour the batter over the melted butter in the pan and return the pan to the oven.

Bake for 18-20 minutes until the pancake is puffed and brown on the edges. Serve immediately with fruit, maple syrup, or buttermilk syrup (recipe here next week. 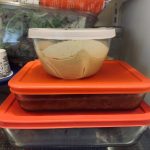 Episode 11: Are Those Leftovers in Your Refrigerator Safe to Eat?General, Podcast